In Search Of Your True Nature

Often I begin class with a centering meditation and a reminder that, according to the ancient Yoga Sutras,

One student in class today asked (rather loudly :), “What’s that?  What’s our true nature?”  Well, that’s a fundamental and beautiful question for which the only answer I know is; “practice yoga and experience it for yourself.”   That is the purpose of yoga - to abide in our true nature and experience who we truly are.  Deep,

How To Declutter The Mind

A friend of mine is exceptional at organizing her home, a trait that, let’s say, I’m still working on.  Every once in a while I’ll ask what she’s up to and she’ll reply with purpose,  “I’m taking my closets back.”  When she puts it like that, I’m inspired to go home and conquer my closets or the pile of mail or whatever it is that has inevitably taken over.

This messy build-up also happens in the mind.  If we’re unaware of the thoughts repeating in our head, a mess of useless chatter builds and blocks out our sense of peace and spaciousness.  The mind unchecked can feel like anxiety, a sense of overwhelm, exhaustion or a lack of vitality.  As the ancient yogis taught: the mind unsupervised is like leaving a monkey or a toddler in charge - it will be messy.

Why Meditate? The Answer Is A Secret.

There is so much evidence out there affirming the benefits of meditation that it’s almost annoying.  Science has determined that meditation lowers blood pressure, strengthens immunity, reduces anxiety, etc, etc. Those are true side effects, but physical benefits are not why ancient yogis lived in caves for years or why spiritual masters spent solitary time in the desert.  Meditators know this.

The real reason why we meditate is a secret.  It’s an open secret, but still a secret to most.  Many philosophers, sages and regular people have eloquently described their meditation experiences.  However, what happens during meditation cannot be described with language.  Meditation is the letting go of the mind.  Words don’t work when you travel beyond the mind.  As the ancient sacred Indian text, the Upanishads, state, “words turn back frightened,” when trying to describe truth.  Without understanding the principal effects of meditation, one must take a leap of faith when beginning a practice.

Why Risk Getting Deep With Your Yoga Class?

Introducing a theme such as "surrender" or "opening the heart" can create a beautiful and expansive class experience. However, you may feel resistance from students as many yogis, especially beginners, come to class for the workout and have no interest in yoga wisdom or introspection.  Weaving yogic insights throughout class without sounding cheesy or, even worse, preachy is also not easy to do.  As teachers, we may question whether or not to take the time and risk diving deeper into philosophy.  But sharing this information is crucial, and probably the reason you became a yoga teacher.
Read More 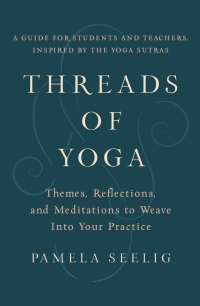 Threads of Yoga: Themes, Reflections, and Meditations To Weave Into Your Practice